In this post, I will describe a data-analysis workflow I developed to address the challenges I face as a computational biologist:

I achieve this by tying together two well-established technologies: Jupyter and Rmarkdown notebooks on the one hand and the pipelining engine Nextflow on the other hand.

In the following section, I explain why using Jupyter or Rmarkdown notebooks alone is not enough. I will reflect on a few weaknesses of notebooks and propose how to address them.

Next, I’ll introduce reportsrender, a python package I created to facilitate generating HTML reports from both Jupyter and Rmarkdown notebooks.

Finally, I’ll show how to use reportsrender and Nextflow to build a fully reproducible data analysis pipeline.

Notebooks alone are not enough

Notebooks are widely used among data scientists, and they are a great tool to make analyses accessible. They are an obvious choice to form the basis of my workflow. However, notebooks alone have several shortcomings that we need to address:

In this excellent post, Yihui Xie, the inventor of Rmarkdown, advocates re-executing every notebook from scratch in linear order, responding to Joel Grus’ criticism on notebooks. Indeed, this immediately solves the issue with ‘hidden states’.

We can execute notebooks from command-line through Rscript -e "rmarkdown::render()" or Jupyter nbconvert --execute, respectively. Moreover, we can turn notebooks into parametrized scripts that allow us to specify input and output files from the command line. While this is natively supported by Rmarkdown, there’s the papermill extension for Jupyter notebooks.

If we, additionally, define a conda environment that pins all required software dependencies, we can be fairly sure that the result can later be reproduced by a different person on a different system. Alternatively, we could use a Docker or Singularity container. Nextflow supports either of these technologies out-of-the-box (see below).

Hide outputs in Jupyter notebooks by using a nbconvert preprocessor

While being natively supported by Rmarkdown, we need to find a workaround to control the visibility of inputs/outputs in Jupyter notebooks.

Luckily, nbconvert comes with a TagRemovePreprocessor that allows to filter cells based on their metadata.

By enabling the preprocessor, we can, for instance, add {'tags': ["remove_input"]} to the metadata of an individual cell and hide the input-code in the HTML report.

Use Nextflow to orchestrate multi-step analyses and automate caching

Nextflow is a relatively novel domain specific language designed to build data-driven computational pipelines. It is really easy to get started with and yet very powerful. Wrapping our pipeline in nextflow automatically adresses the remaining issues:

By executing the notebooks from the command line, we obtain an HTML report for each analysis step. While you could send them around via email, I recommend to automatically distribute them via GitHub pages. The website serves as a single point of truth and everyone needing to access your results will automatically receive the latest version.

I created the reportsrender package to facilitate building the pipeline

To make these steps as easy as possible, I developed the reportsrender package in Python which wraps Nbconvert and Rmarkdown into a single command. It adds support for hiding inputs/outputs and notebook-parameters to Jupyter notebooks. Both Rmarkdown and Jupyter notebooks are rendered with the same template through pandoc, ensuring consistently looking reports.

Executing and converting a notebook to HTML is as easy as:

Through jupytext, reportsrender supports executing arbitrary notebook formats. It can even execute python notebooks with Rmarkdown through the reticulate engine:

Running parametrized notebooks is as easy as

Using the index subcommand, it allows for generating an index page for github-pages:

The full pipeline including additional recommenations on how to structure the project is available from GitHub.

Here, I will describe step-by-step how to build it. 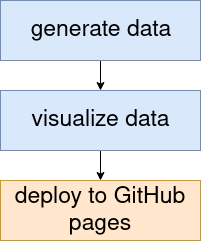 1. Create a Jupyter notebook that generates the data

Let’s first create a cell that defines the parameters for this notebook (in our case, the output_file).

To this end, define a variable in a cell and add the tag parameters to the cell metadata. This is documented on the papermill website. The declared value serves as default parameter, and will be overwritten if the parameter is specified from the command line.

This parameter can be manipulated from the reportsrender call:

Now, let’s generate some data. For the sake of the example, we will just download the iris example dataset and write it to a csv file.

2. Create an Rmarkdown notebook for visualizing the data

First, we define the input file as a parameter in the Rmd document.

Next, we use ggplot2 to create a plot:

3. Create a nextflow pipeline that chains everything together

The first process takes the Jupyter notebook as an input and generates an HTML report and a csv file containing the dataset. The channel containing the dataset is passed on to the second process. Note that we use the conda directive, to define a conda environment in which the process will e executed.

The second process takes the Rmarkdown notebook and the csv file as input and generates another HTML report.

The HTML reports are read by a third process and turned into a website ready to be served on GitHub pages. The publishDir directive will copy the final reports into the deploy directory, ready to be pushed to GitHub pages.