Science is facing a reproducibility crisis. Poorly designed or implemented scientific software represent a major limitation in making packages reusable and analyses reproducible. In this article, I’ll break down good software engineering practices to six hallmarks. These hallmarks guide researchers through improving their code quality, maximizing the utility and impact of the software, and in the long run improve the perspective of replication in science.

Adhering to these guidelines is one aspect of making your research FAIR (findable, accessible, interoperable and reusable). 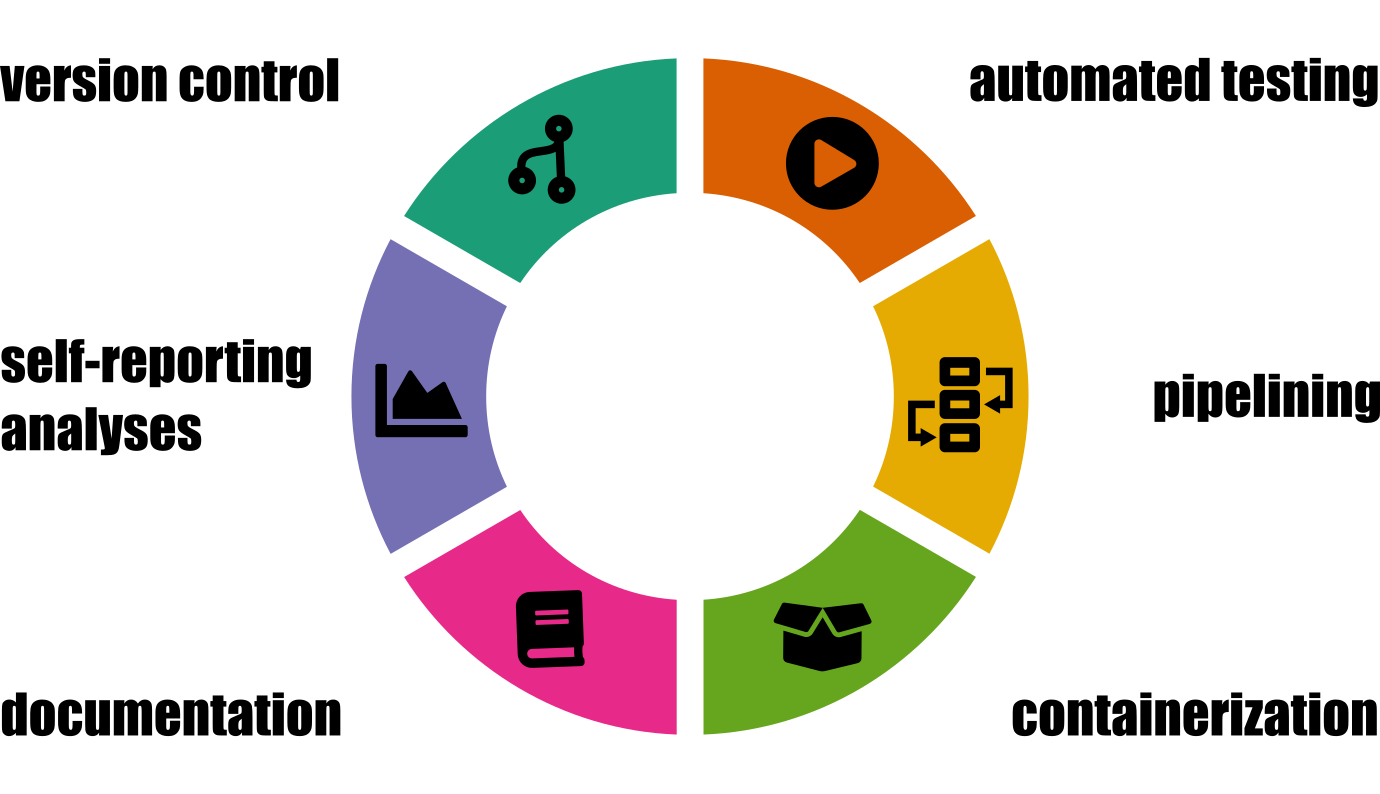 Figure 1: The Hallmarks of Good Scientific Software1. The icons (except pipeline) are from fontawesome. The figure may be reused under CC BY 4.0 license.

These hallmarks focus on tools and habits which will help taking your software quality to the next level. I assume that you are already familiar with the basics of clean coding principles, i.e. you format your code consistently, use sensible variable names, and keep everything stupidly simple. The importance of writing easy-to-read code cannot be overstated. A good starting point for learning how to write clean code is this style guide for R and the clean-code-python project.

Next, let’s distinguish between software packages and data analysis reports. Both are pieces of software which are covered by the hallmarks – however, they have slightly different priorities. Software packages are a tool, or a collection of tools which are created with the aim of being applied to different datasets. A typical example would be a sequence aligner like STAR, or a library for single-cell RNA-seq analysis like scanpy or Seurat. The main goal of software packages is reusability, defined by the ability to reuse the code for multiple datasets and for diverse goals of data analysis.

In contrast, data analysis reports mostly build upon existing software packages and are specifically adapted to produce interpretable results for a certain dataset. The main goal of data analysis reports is reproducibility, defined by the ability to reproduce the results when run in another computing environment or in a later time point than when the report was written. Yet, it can often make sense to abstract a data analysis report into a reusable pipeline which can be applied to other datasets.

The first four hallmarks apply to both software packages and data analysis reports. (In fact, they apply to pretty much any kind of software):

In addition to that, two more hallmarks apply to data analysis reports:

The first, and arguably the most important hallmark is to use git2. It keeps track of all your code changes, and allows you to share your code on public repositories such as GitHub3. Making the code publicly available and easy to be modified by others is the first step towards making your project both discoverable and reproducible.

There are many benefits of using git and GitHub, for instance:

Yet, the most important aspect of using GitHub is to get people involved with your software.
Communication is an essential part of the scientific process, and GitHub is the way to communicate about scientific software. It increases your visibility in the community and makes your software being discovered more easily. You can retrieve feedback in form of bug reports, feature requests and code reviews. Others can directly contribute improvements in the form of pull requests. Finally, it enables you to browse other, well-engineered pieces of software and learn from them by reading their code.

Tool of choice: git in combination with GitHub or GitLab.

Use automated testing and continuous integration

Automated testing is an industry standard in software firms for years, but it is terribly underused in most scientific software, particularly those developed by single contributors such as students and contractors. Automated testing does not only ensure that your software package works on other systems than yours or that you don’t break old functionality while adding new one – it also increases the likelihood that the results your software generates are actually predictable, at least within the space of the input parameters that you can test, and correct. The correctness of the software output is top priority for scientific software.

The concept of automated testing is simple: for every piece of code you write, you also write a unit test that calls the piece of code with some example data, and validates that it produces the expected result.

Initially, this might seem like a waste of time, but it isn’t: it helps to to find bugs early. As a result, it pays off and saves time in the long run. Finding bugs early decreases the cost for fixing them. If you detect a bug right after writing the function, you still have everything in your memory and can likely fix it within minutes. If the bug is discovered by someone else a few months later, it might take you hours or days to figure out the problem, because you have to dig into the code again. There are excellent packages for automated testing for virtually every programming language. The most common ones are pytest for Python and testthat for R. Moreover, Hypothesis is a python package implementing property-based testing, which holds the promise to facilitate writing tests while covering a larger set of test cases.

Writing tests by itself is not helpful if they are not executed on a regular basis. This is where continuous integration comes into place. Continuous integration runs your tests every time you upload your code on e.g. GitHub and notifies you if the tests fail. By combining continuous integration with a branch-and-pull-request workflow, you ensure that the code on your master branch is always fully tested. You are notified when tests fail, therefore increasing the chance to fix bugs early and quickly.

If I have seen further it is by standing on the shoulders of Giants.

This is definitely true for scientific software. Most software packages and data analyses would not be possible without giants like dplyr, ggplot2, numpy, scipy and many more domain-specific packages. Unfortunately, complex dependencies make it hard to install and run your software. They also hamper reproducibility of your analysis as different versions might be incompatible or produce slightly different results. This phenomenon is commonly referred to as the dependency hell.

Therefore, it is vital to accurately declare all dependencies required for your software to run, down to the exact version number. The most reliable way of doing so is to build a container with all software required to run your software. That way, your package or analysis can be ran in exactly the same software environment you have been using. Containers are one of the few ways to ensure that your analysis can be ran in a few years from now4.

For software packages (as opposed to data analysis reports) it is also appropriate to declare the dependencies in the format of the corresponding package manager. This could be a DESCRIPTION file for R, a setup.py file for python, or a conda recipe. Arguably, the best option is to offer both: properly declared dependencies and a container.

Tools of choice: Singularity and Docker for data analyses. Bioconda or conda-forge for software packages.

Documentation is an essential part of each software. Without proper documentation, the most elegant piece of software can be useless. As a rule of thumb, the documentation should have at least as many lines as the source code. Documentation helps users getting started with your software quickly and vastly increases the potential userbase.

For software packages, good documentation consists, one the one hand, of a documentation of the public interface (API). The API consists of all functions, classes etc. which are exposed to the end user. The API documentation describes the input parameters and results for each function. On the other hand, the documentation should comprise instructions on how to install the package and a step-by-step tutorial teaching the user to apply the software to real-world datasets.

For data analysis reports, it is best to mix the documentation with the code (see self-reporting analyses). Moreover, it is vital to provide step-by-step instructions on how to rerun the analysis.

Tools of choice: sphinx (Python/general purpose) and pkgdown for R.

It is common practice to run a few commands in an R shell to produce a plot and then copy and paste it to a PowerPoint presentation. This is not only terrible from a reproducibility perspective, it is also inefficient and error-prone. It is inefficient, because you have to re-do the plot manually if you change your preprocessing or get new data. It is error-prone, because you’ll forget to update all plots and old (wrong) versions keep floating around.

By using self-reporting data analyses this process gets streamlined and automated. An excellent way to write self-reporting data analyses are Notebooks. Notebooks are an implementation of literate programming, a way of mixing computer code with prose language. In this way, you can explain your data and your results at the same place where you perform the analysis. Notebooks can be rendered into beautiful web-pages, presentations, or PDF documents which you can directly share with your collaborators. Finally, you can publish them alongside your paper ensuring other researchers can understand your analysis.

However, notebooks are a terrible tool to develop software packages. Only use them to describe your analysis using high-level functions and factor out all longer, repetitive code-snippets into an external software package. The package can be properly tested using automated testing as described above, and re-used for other projects, saving you time in the long run. For more background, read this post by Yihui Xie.

Tools of choice: Rmarkdown and bookdown when using R, Jupyter notebooks, and jupyter book for Python and other languages.

Use a workflow manager

While notebooks are great for documenting and streamlining downstream analyses, they are unsuitable for computationally expensive tasks like preprocessing raw sequencing files. Similar to the downstream analyses, the naive approach is to write a few bash scripts and run them on a workstation or submit them to a high performance cluster (HPC). Again, this is irreproducible, inefficient and error-prone. It is irreproducible, because it is hard to appreciate in which order the scripts need to be ran. Moreover, the scripts are likely to be specific for the scheduler used on your HPC. It is inefficient, because you manually need to ensure that all jobs completed successfully before running the next step. It is error-prone, because it is easy to forget to re-execute certain steps after changing parameters or fixing bugs.

By using a workflow manager, you solve all these problems. In a pipeline-script, you implicitly document which of your analysis-steps depends on which input-files and intermediate results and thereby, in which order they need to be executed. The workflow manager takes care of executing the individual steps in parallel wherever possible and makes sure to only re-compute parts that were modified. Moreover, it abstracts the pipeline logic from the system used for execution, enabling your pipeline to run everywhere, be it on a personal computer, institutional HPC or cloud instances.

Workflow managers play well with the other concepts discussed in this article. They can directly execute pipelines from GitHub, execute tasks in containers and can be used to tie together multiple notebooks. In brief, by providing a pipeline, other researchers can reliably reproduce your entire analysis with a single-command.

Finally, when developing re-usable software packages, it can often make sense to build upon a workflow manager. Many problems, like parallelization, submitting jobs to HPC or cloud instances, caching, etc. has already been excellently solved by these tools and there is no need to re-invent the wheel.

Tools of choice: nextflow or Snakemake5

In this article, I gave a high-level overview of the hallmarks. For a hands-on tutorial I recommend this training material by the NBIS. Quite recently a review preprint about how and why you should use pipelining engines has been published on biorXiv.

I would like to thank Jitao David Zhang for his feedback on this article.